The passive "se" is very similar to the impersonal "se". The agent of the action is either unknown or unimportant and the influence is placed on the action and not the doer/actor.

One of the many uses of the word se in Spanish is in a "no fault" construction. Just as the name indicates, this construction is used for unexpected occurrences and does not place the blame on anyone. These sentences include se, an indirect object pronoun which refers to the person(s) involved (usually as an innocent victim) and the verb which is in the third person and agrees with the recipient. For example:

The no fault construction is very commonly used. In fact, if you were to not use it you would appear to have done the action on purpose. For example:

Both of these sentences would imply an intentional act on the subject's part. Another possible translation of the first sentence would be, "I broke the table on purpose."

"Se" is undoubtedly the most versatile of the Spanish pronouns. As you learn Spanish, you will come across "se" used in a variety of ways. For the beginner, it isn't necessary to learn all those ways, although it can be helpful to be introduced to its various uses to help avoid confusion when you see it used in a way you haven't studied yet.
Here are the major uses of se, along with examples in sentences:

As a reflexive pronoun:

This is its most common use. As is explained in the lesson on reflexive pronouns, such pronouns indicate that the subject of a verb is also its object. In English, this is usually accomplished by using verbs such as "himself" or "themselves." Se is used as the reflexive pronoun for third-person uses (including when usted or ustedes is the subject). Some verbs (as in the final two examples below) can be used reflexively in Spanish even though they aren't translated that way in English.

As the equivalent of the English passive voice: By using se, particularly when discussing inanimate objects, it is possible to indicate some sort of action without indicating who performed the action. Grammatically, such sentences are structured in the same way that sentences using reflexive verbs are. Thus in a literal sense, a sentence such as se venden coches means "cars sell themselves." In actuality, however, such as sentence would be the English equivalent of "cars are sold" or, more loosely translated, "cars for sale."

As a substitute for le or les:

When the indirect-object pronoun le or les is immediately followed by another pronoun that begins with an l, the le or les is changed to se, apparently as a way to avoid having two pronouns in a row beginning with the l sound.

In some sentences, se is used in an impersonal sense with singular verbs to indicate that people in general, or no person in particular, performs the action. When se is used in this way, the sentence follows the same pattern as those in which the main verb is used reflexively, except that there is no subject to the sentence that is explicitly stated. As the examples below show, there are variety of ways such sentences can be translated to English.

"Se" shouldn't be confused with "sé" (note the accent mark), which is usually the singular first-person present indicative form of saber ("to know"). Thus "sé" usually means "I know." Sé can also be the singular familiar imperative form of ser; in that case it means "you be." 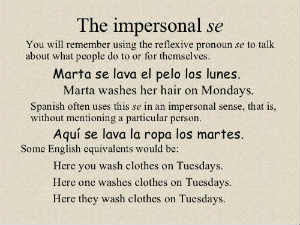 There is a large difference when to use se in Spanish and English. can be shown to have been available in hindsight and data that was actually observed, used and integrated by the crew given their ongoing tasks and attention demands. It is clear that there is a mixture of individual metal oxides of NiOx and ZnO. Commercial banks could also decide whether to grant a loan or credit to the organisations based on their financial positions, for instance sufficient assets and liquidity. However, with the kind of importance they play in detecting larger threats, more efforts need to be concentrated towards carefully drafting the baselines for configuration items of a system. Time visions must be managed all together for the maximum capacity of se in Spanish to be figured it out (Siebdrat, Hoegl, & Ernst, 2009). If the above can be accomplished for the various brands of a given product, insights into buying behaviour may follow.

Also, it is intended to be a program that focuses on the Human Resource development in the context of business with strategic management perspective. Roaming the streets was the military, using the impersonal se and passive se and detaining individuals that were promoting retaliation or opposing the new established government. Don't confuse Spanish impersonal se and se impersonal, they are both the same. I write this in quotes because under this, the military was acting but in reality the individuals being taken away had no part or even cared about the new government. Automated trading system also opens up a new avenue for the traders to trade multiple accounts with a wide range of strategies at one time. Ethics is something very valuable that should be provided by every person in order to develop the legal code (Brooks). You know when to use se impersonal in Spanish and English. It very well that in USA most catholic dioceses have gone bankrupt because of compensating the children or victims of child molestation,rape,defilement and many other sexual crimes committed by the catholic clergy.This the devil has accomplished to the chagrin of the whole catholic church. The study shows how people can benefit from doodling because you can recognize information but there is also a disadvantage of not being able to recall information.